The Republic of Cospaia: An Anarchist Renaissance City

When in search of an example of libertarianism or so-called right-wing anarchism, many antistatists are quick to reference practical plans based on systems we already have, such voluntary insurance companies or security firms' replacement of the role of the state. But this usually doesn’t satisfy the the other side. They want a historical, material example of anarchism or radical libertarianism in practice in a specific place and time. It can be hard to name a place like that. Most "anarchist" polities have been coercive, such as the Paris Commune. Most of them have also been communistic, like Puerto Real. Those examples don't exactly lend themselves to the point that extreme free-market capitalism and volunteerism are practical or peaceful.

But a place that well illustrates a long-lasting polity that also lacked the trappings of a state is the Republic of Cospaia, a little-known Italian city-state.

The Republic of Cospaia existed between 1440 and 1826. That's nearly four hundred years. For comparison, the Republic of Cospaia existed for fifty-two years longer than Europe has known about the Americas. It is the longest-lived, most modern, most capitalist, and most Western anarchist society to ever exist. "Western" is important because often it is not enough to site anarchic native civilizations of the Americas and Oceania. Some argue that their anarchism was a result of their ill-advanced technology or their relative isolation. This bypasses all of that. Cospaia was as developed as any other mid-rural hamlet at the time of its conception. It continued to advance at a comparable rate to surrounding areas until its death in the early 1800s. Unless one argues that all of the Mediterranean was primitive well into the nineteenth century, the argument of ill advancement holds no water.

An anarchic region does not mean a chaotic region. It also does not mean a region without a system to enact order or the enforcement of general morality. All that qualifies a place as anarchic is it lacks an entity that holds a monopoly on force. Although Cospaia did not have a state—the entity in a region that holds a monopoly on force—it had what could be called a sort of deliberative body concerned with matters of the local church, morality, and how to handle outside aggressors (of which there were surprisingly few). This body took the form of the "Council of Elders and Family Heads," and perhaps is only called a republic for that inclusion of "family heads." This body decided with whom the members of the families would associate personally and in business. That was not done through force, but through familial pressure. Despite the fact that this council was nonviolent and, importantly, not a state, Cospaia seems to have been as stable as any other region of the time. There were no taxes in Cospaia, except for the disputed existence of a "council membership" fee. But if it did exist, this fee cannot be called a tax, because inclusion in the council was voluntary. Excommunication of a family due to refusal to pay this fee would also not have been a "negative force," considering that this region was not under the control of Italy and that there was a wide escape zone for exiles around Cospaia. Not only was Cospaia technologically comparable to surrounding regions, but in the 1500s it was the key tobacco-manufacturing region in Italy.

Thanks to the Pope's policy of excommunicating anyone found smoking and Italy's tobacco ban, Cospaia (which was not Italian) was the only place in Italy able to easily manufacture it. Their economy boomed. Cospaia lacked prisons and police, and this was compensated by a robust culture of self-defense and what seems to have been a general attitude of nonaggression. This attitude was likely created by the closeness of the community (the population was between three and six hundred) and the involvement of families in governance. 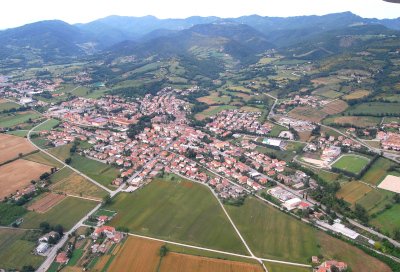 What is most inspiring about the existence and history of Cospaia is that it came into existence by accident. A territorial dispute between the papal states and the Grand Duchy of Tuscany left out a small region between two rivers known as Cospaia. When Cospaia noticed that it had been overlooked, it quickly declared independence and neither the Duchy of Tuscany nor the papal states bothered to take it over. Its people paid no taxes on the outside and no internal taxes. They felt no need to have any jails, police, military, or bureaucratic nightmares to dilute their industry. Cospaia was not the result of a revolution or incrementalism to destroy the local Italian state from the inside. They were not too-late clones of the organized and planned communes of medieval Europe. Cospaia was simply the result of a community with one desire: to be left alone. Cospaia was such an astonishing accident that its "military," which amounted to nothing more than a comparably anemic Mediterranean minuteman force, never faced an outside conflict significant enough to be written about. Cospaia was so peaceful, so small, and provided so many resources to her neighbors that no one ever bothered to invade or attack.

The end of Cospaia came with its inclusion in the papal states in the early 1800s. Its motto, Perpetua et firma libertas, or "Perpetual and secure freedom," did not quite disappear. It maintained its industry and sold tobacco to foreign regions while expanding the trade to neighboring Tuscan regions, improving those economies along with its own. It remained nearly tax-free and was one of the lowest-taxed areas in Italy well into the twentieth century. With the burial of Cospaia's motto, the most robust example of practical volunteerism was buried. But Cospaia's history is not forgotten. It is the most tangible and modern example of a truly liberated society. One could say that it was the wealth and homogeneity of 1960s American communes that made them livable, and that the rurality and isolation of natives makes their relative anarchism a byproduct of "primitivism." But no one can say the same of Cospaia, a tiny nation on a hill, as advanced as any other Renaissance nation and the most profitable tobacco market in Italy.

Cospaia was not successful despite its freedom, lawlessness, and wide-open markets, but was successful because of those things. A voluntary coalition of community figureheads led Cospaia past its status as a mild and forgotten region to become the biggest tobacco producer in Italy for almost three centuries. Its existence was the natural result of the state leaving the region behind. This state of nature, contrary to Hobbes, was peaceful and more prosperous than the condition of its prohibition-stricken neighbors. Cospaia is by far the best example in favor of the practicality of libertarianism, capitalism, and anarchism. It is a place someone could travel to, touch, and experience. It is a utopia made real, because libertarianism is not utopian; it is perpetual and secure freedom.


Original paper first published 22 april 2020 on Mises.org
Republished here thanks to licence CC4, as mentioned in the original article.